Pomeranians are not fertile dogs. The average litter size is 1 to 3 puppies. It makes breeding Pomeranians a really hard business. A limited set of genes does not allow breeders a great room for perfecting the breed. That is why the range of good breeding lines is so small, and high quality purebred puppies cost quite a penny.

However, buying a Pomeranian without pedigrees is fraught with danger. A puppy may fail to conform to the breed standard, leaving you with a feeling of disillusionment and fraud.

It is not rare when Pomeranian puppies turn out to be larger than it is expected, or experience personality dimensions. Hence, it is strongly advised to check out the puppy’s pedigree.

A responsible Pomeranian breeder will always be ready to explain how the sire and the dam were chosen. A breeder who carefully planned the litter is likely to know much about the leading stud dogs, and brood bitches.

Ask questions concerning the frequency of breedings. It is also good if the breeder informs you on the issue of awards the parent dogs have. References from other Pomeranian owners will confirm the breeder’s high standards.

It is a good idea to contact local breed clubs in search of a reputable Pomeranian breeder. Experienced breeders are likely to announce their puppies some time before they are born.

It is done to give potential owners time for making decision. Besides, a larger number of potential owners let breeders better determine which homes are suited best for their little Pomeranians. 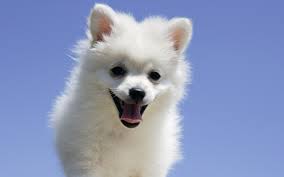 Pomeranians have never been a leading breed of dog in America, like Labrador Retrievers, or Golden Retrievers. Nevertheless, the Pomeranian is an old breed loved in many countries, and in all layers of society.

Royalty, artists, and common people enjoyed the Pomeranian’s companionship since the early days of the breed’s history.

It is a well known fact that British monarchs contributed much to the Pomeranian’s success in Great Britain. Thanks to their will to breed tiny dogs we now have this cute living being.

However, there is always something new to find out about your favorite breed. Have Pomeranian owners ever wondered what they can have in common with such distinguished people like Mozart, Michelangelo, or Isaac Newton?

Maybe, it is the interest in music, painting, or arts that unites all of them? There is such a possibility, but it is obviously not the only reason. In fact, all of these famous artists were happy owners of Pomeranians.

It is believed that Mozart wrote an aria to express his true love for his Pomeranian named Pimperl. It is a pleasant thought to think that his feelings referred to all little representatives of the Pomeranian family.

Michelangelo owned a Pomeranian too. Who knows what feelings and moments of inspiration his pet brought to him. At all events, it is known that the artist was accompanied by his Pomeranian while painting the ceiling of the Sistine Chapel.

Diamond was the name of Sir Isaac Newton’s Pomeranian. When one comes to think of Pomeranian’s brilliant personality qualities, one cannot have any doubts as to in which way that fluffy-coated creature with dark sparkling eyes brightened the life of the genius.

What about present day Pomeranians? Has time affected their personality and charm? If asked about their Pomeranians, contemporaries state that their pets are one of the cutest breeds of dog that is second to none in pleasing their owners and making their life happier. 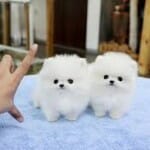 Teacup Pomeranian – Read This before Buying a Teacup Puppy 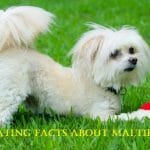 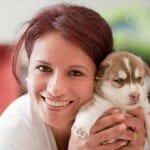 How to Train and Care for Your Husky Puppies

How much are POMSKY puppies for sale? 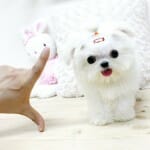 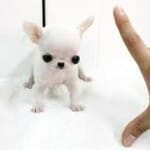 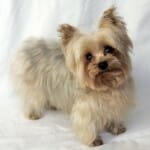 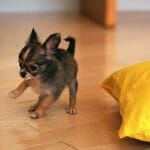 All About the Breed: Pomeranian Chihuahua 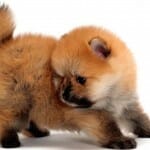 Owning a Pomeranian – What You Need to Know